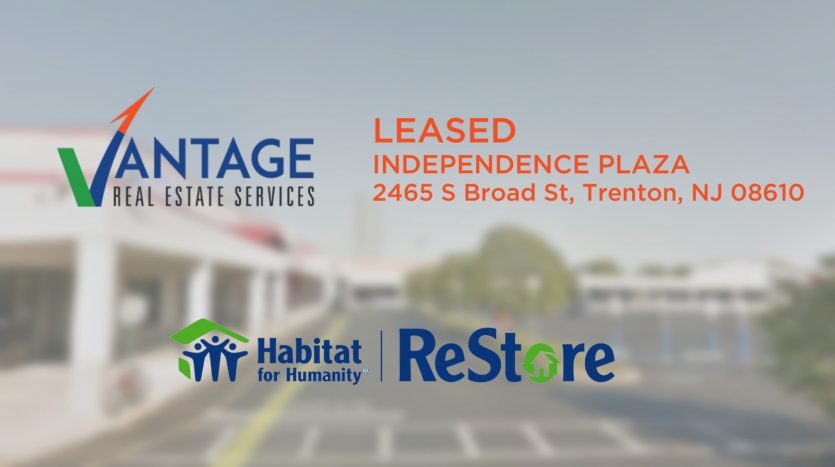 “It was a pleasure working with the Vantage RES and Habitat team. Together we were able to move quickly towards a seamless transaction. We are excited to bring Restore to the center,” stated landlord Michael Jemal of IP Associates.

Garton worked closely with Richardson and Walsh to identify the space and secure a lease for a new Restore® located at Independence Plaza, Hamilton, NJ.

“We are so appreciative of the support we received from Vantage Real Estate Services while negotiating the lease terms for our second ReStore.  Having the resources available that the Vantage team provides made the process almost effortless for us and allowed for us to continue business as usual knowing the transaction was in good hands,” Garton stated.

About Habitat for Humanity ReStore: The ReStore is a home improvement store and resale center that sells donated new and gently used furniture, home accessories, building materials and appliances to the public at 50-90% off of the retail price. Habitat for Humanity uses funds raised by its ReStores to help build, rehabilitate and repair homes in partnership with low-income families. Habitat for Humanity of Burlington County and Greater Trenton-Princeton (Habitat BCGTP) is an independent affiliate of Habitat for Humanity International, which operates through local affiliates. As a result, all functions have maximum relevance to individual communities. Since inception, the Habitat BCGTP has built 151 homes throughout the Burlington and Mercer area, serving 49 cities and over 750,000 residents.

About Independence Plaza: Independence Plaza is 252,000 SF community shopping center in Hamilton, NJ. In 2015 JJ Operating, along with its partners, purchased the mostly vacant and distressed property from its former owner. Since then, much capital has been invested. Large anchor tenants have opened including a new 45,0000 sf Regal Cinemas movie theater, Save a Lot grocery store, Crunch Fitness health club, and Ollies Bargain Outlet general store. The shopping center has a few more available vacancies, with the landlord planning to make significant improvements in order to bring the center to full occupancy.